The most grandiose work of all ever made from amber is, of course, the famous Amber Room of the Catherine’s Palace lost during the Great Patriotic War and revived recently. All the achievements of craftsmen of the past in the sphere of artistic amber treatment were expressed in it in their full.

The history of the Room rich in events dates back to the very beginning of the 18th century. In 1701 after his accession to the throne the Prussian King Frederick I decided to have something unusual, that no monarch of Europe had. It is quite natural that amber was selected for this purpose – a symbol of the Prussian land. It was decided to decorate the main hall with amber.

There are different opinions regarding the author of the project of the amber decoration. According to one of the opinions the concept was elaborated by Andreas Schluter, a well-known Prussian architect and sculptor who in the days of Frederick I was involved in the construction of many palace buildings. Another story goes that the concept was initiated by Johann Fredrick Eozander, the favorite architect of Queen Sofia-Charlotte who supervised the construction of her personal residence in Charlottenburg and who later replaced A. Schluter and took over the position of the chief court architect. No documentary records confirming either version have preserved.

A lot more is known about the craftsmen who made the amber coating. In 1701 the Danish court craftsman Gottfried Wolfram was invited from Copenhagen to do the works on amber. He had been making amber panels till 1707, then due to disagreements with the new court architect Eozander von Goethe he was dismissed. Amber craftsmen Ernst Schaht and Gottfried Turau who were invited from Danzig continued the work. It is quite difficult to determine the exact time of completion of the works due to the fact that during Frederick I lifetime the plans of placing the amber décor were changed several times. They were going to assemble a gallery from amber panels in Charlottenburg Palace first, then in Oranienburg Palace that resulted in constant introducing changes into the project. Thus, the work was delayed.

Eventually after the death of Frederick I in 1713 his son Frederick Wilhelm I put an end to all the expensive works in his father’s palaces. The ready parts of the amber coating were placed then on the walls of the cabinet of Tobacco board on the main floor of the Large Royal Palace in Berlin. The size of the room was approximately 4.5 x 5 m. The Berlin Palace is the last and, perhaps, the only exactly identified location of the Amber Cabinet before its journey to Petersburg.

In 1716 during the meeting of Peter I with Frederick Wilhelm at which they talked about contracting an alliance between Russia and Prussia the Prussian King gave the Russian tsar a “decent present” as a token of friendship and respect – the Amber Cabinet. It was brought to Petersburg (by the way, via Koenigsberg, Memel and Riga) in 1717, and for quite a long time amber panels along with separate carved parts that the décor of the Cabinet comprised of were kept in Peter’s Summer Palace, in the home “cabinet of curiosities” where a lot of curiosities and rarities collected abroad were kept.

The Cabinet was recollected of only during the reign of Empress Elizaveta Petrovna. In 1743 in the course of construction of a new capital residence, the Winter Palace that was the third in a row, it was decided to use the amber coating in the decoration of one of the main chambers of the Empress. The construction works were supervised by the court architect Francesco Bartolommeo Rastrelli, and an Italian craftsman of “moulding and plastering” Alexander Martelli was invited to work specifically with amber.

While creating the Amber Chamber in the Winter Palace Rastrelli immediately encountered a lot of difficulties. The whole of the décor of the Cabinet comprised of separate panels made in the mosaic technique. There were 22 units: 12 upper ones of different width and 10 lower panels. In order to decorate the chosen room with them it was necessary to introduce additional parts that would unite the picture into a single architectural ensemble. In order to attain this F.B. Rastrelli used the technique that was widely spread in the European decorative art of the 18th century – he placed mirror pilasters in carved gilded frames between the amber panels.

Arranging panels on the walls also turned out to be quite difficult. The panels’ compositional centers were three large carved amber frames with mirrors made in Koenigsberg in the 17th century before the Cabinet itself was assembled. A fourth frame had to be made to attain their symmetrical arrangement. Having learned about Empress Elizaveta Petrovna’s displeasure, the Prussian King Frederick II who was trying to win her favour, ordered an amber frame in Koenigsberg and presented it to the Empress in 1745. Russian imperial symbols were purposefully used in the gorgeous carving decorating the frame: on the top of the frame there was a Russian crown, and sculptural compositions on the sides and at the bottom of the frame symbolized Russia’s victories in land and sea battles.

Thus, all the difficulties were overcome and the amber coating in the new framing from mirrors and gilded carving appeared in the main chambers of the Winter Palace. It is known that the Amber Chamber that was next to the Empress’s bedchamber served as a place for audiences for foreign ambassadors and noblemen.

But the “adventures” of the Amber Cabinet did not end with this. In 1755 by the order of the Empress it was transferred (literally in hands) to Tsarskoye Selo where a summer residence was being constructed according to F.B. Rastrelli’s project. It was decided to arrange the main amber hall in the Large Tsarskoye Selo Palace. The area of the hall was larger than of that in the Winter Palace – in totaled 96 sq. meters with the walls being 7.5 meters high (the total height of the amber panels was only 4.75 meters). Additional parts were needed again. Rastrelli retained the rhythm of alternating amber panels and duplex mirror pilasters in carved gilded frames that he used in the Winter Palace, having added six more to the latter. The empty space between the panels and the ceiling surface as well as between the pilasters was filled with painting imitating amber mosaic. The painting of the upper tier was decorated with volumetric gilded carving on wood in the form of garlands with sconces and figures of cupids supporting the vases. The décor of the upper tier was supplemented by sopraportas also made by Rastrelli’s drawings on which delicate ladies’ heads grew from intricate volutes of the rocaille. Similar heads served as completion to each mirror pilaster.

Four mosaic pictures were placed into the amber frames in the center of the four largest panels. The mosaics were made from agates and jaspers in Florence by the sketches of the Italian artist Giuseppe Dzokki in the 1750s. These were allegoric images of human senses – “Taste”, “Eye-sight”, “Hearing”, “Sense of Touch and Smell”.

The final stage in the history of decoration of the Amber Room took place during the reign of Catherine II. In 1763 she issued a decree on the replacement of the painted parts of the Room with amber mosaic. Craftsmen from Koenigsberg were especially invited to do the work – Fredrik and Johan Roggenbuks, K. and G.V. Fride and Johan Gotlib Welpendorf. The Russian learners of the Koenigsberg amber masters worked together with their teachers, among them were Gerasim Kozlovsky, Nikita Savin and Alexander Mikhailov. The craftsmen made amber spans between the pilasters, framed panels under them, a corner table, one sopraporta and garlands under the cornice finishing and uniting the whole of the picture into an integral whole. A little later artistic parquet was made in the room by the drawings of the architect V.I. Neyelov – it was assembled from colour tree species: rosewood, nutwood, red sandalwood and maple. The works had been completed approximately by 1770.

Due to the creative efforts of craftsmen of various fields a small and intimate in its character Amber Cabinet as it had been in Berlin turned into a gorgeous gala hall that was called the Amber Room. All the magnificence of the amber décor of the room appeared before the visitors in the light of 565 candles reflected in 24 pilasters and two large mirrors placed between the windows. The Room invariably enraptured everyone who was lucky to admire it.

In such a changed form the Amber Room was in the Catherine’s Palace in Tsarskoye Selo (now Pushkin) for approximately 200 years. During the Great Patriotic War it was transferred by fascists to Koenigsberg (now Kaliningrad) where it was installed in one of the halls of the Royal Castle. Here its traces were lost. The long searches for the Amber Room have not brought any positive results so far.

A new page in its history was opened at the end of the 20th century and it is closely connected with the Kaliningrad Amber Museum. Before its opening for the establishment of the exposition “Amber in the 17th – 18th centuries” the Museum started to order replicas of articles of that time kept in the museums of Russia and abroad. The model of the Amber Room of 1/5 of its authentic size was supposed to become the central complex of the exposition. The draft model was elaborated by the Leningrad artist and architect G.S. Khozatsky, the author of the artistic solution of the whole of the Amber Museum.

In 1977-78 the model of one panel of the Room was made in the technique and the material of the original. It was considered by the Council of the Artistic Foundation of the RSFSR, by the Government Commission, and on April 10, 1979 the Council of Ministers of the RSFSR issued a Decree on the reconstruction of the Amber Room in the Catherine’s Palace in Pushkin in its original size. The main argument in favour of the project being implemented was the model of the Room’s panel and more than 50 replicas and scientific reconstructions of the articles of the 17th – 18th centuries made by modern artists on the Amber Museum’s order. In the course of this work the craftsmen mastered the technology of artistic amber treatment, scientific methods were elaborated that actually made the basis of the project of reconstruction of the Amber Room panels.

The project itself was developed by a group of experts headed by A.A. Kedrinsky, the chief architect of the National Museum-Reserve “Tsarskoye Selo” who was involved in the restoration of the whole of the Catherine’s Palace. Artists of different fields worked at the reconstruction of the interior of the Amber Room – sculptors, painters, wood carvers, parquet makers. Of greatest difficulty was the reconstruction of the amber décor itself. Like once in the 18the century an amber workshop was established in the Catherine’s Palace. The core of the group comprised of stone-carvers who used to make articles for the Amber Museum – A. Zhuravlev (head of the workshop until 1995), A. Krylov, A. Vanin, V. Zhirnov, V. Domrachev and others. The workshop became a center where all the information on the Amber Room was coming to, scientific experiments were carried out, the amber’s “behaviour” was studied, complicated technological issues were solved connected, for example, with the restoration of the colour of mosaic panels or with the height of the raised ornaments. Here they also reconstructed mosaic pictures of hard stones gathered along the whole of the territory of the former USSR. In the assembling of Florentine mosaics they used the Urals jasper, the Altay Cargon porphyry, Belorechiye quartzite, Moscow and Kazakhstan silicons, Transbaikalia lazurite and Italian marbles. And amber was delivered by the Kaliningrad Amber Factory during the whole period of works.

The new Amber Room revived by the modern Russian masters after more than 20 years of laborious searches and hard work appeared before the public in 2003. Its opening became one of the most important events in the ceremony of the celebration of the 300th anniversary of St. Petersburg. 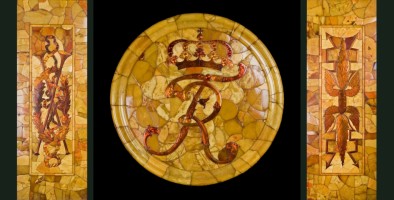 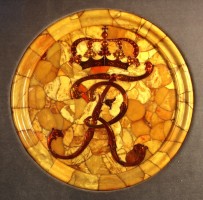 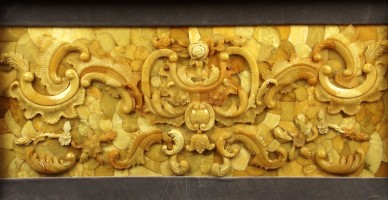