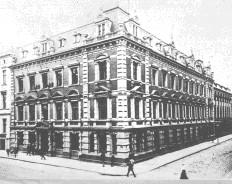 The State Amber Manufactory was established in Konigsberg in 1926 as a joint-stock company with its branches in Berlin and Danzig.

Amber was extracted in the village Palmniken, where the initial treatment of the stone was conducted and a smelting shop was located. Konigsberg became the center of end production.

A special attention was given to the quality of making and high artistic level of amber articles. From the beginning of the 1930s a wide advertising campaign was launched aimed at promotion of the «German gold» within the country. The "Day of Amber" was celebrated in Palmniken where huge models of the production were shown during a gorgeous parade.

The Manufactory opened its representative offices in Paris, London, Vienna, Brussels and New York. The articles of the Manufactory gained international acceptance also due to participation in numerous exhibitions where they were repeatedly awarded with high rank prizes.

The State Amber Manufactory became the largest in the world enterprise for extraction and treatment of amber. A high artistic level of its mass production played a significant role in the promotion of amber articles far beyond the borders of Germany. 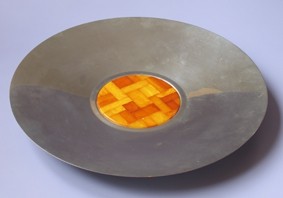 The various range of the articles produced at the Manufactory was divided into five groups.

The most numerous group included jewellery articles. The other group comprised of the household articles. The third consisted of the articles of religious faith. The fourth group involved souvenirs, commemorative medals, sports prizes as well as various badges.

However, the production was not limited to only serial products. The fifth group included original works of art, sculptures and raised works from amber. And the famous models of amber sailing vessels became truly rarities.

A special significance in making highly artistic articles was given to returning to the traditions of old German craftsmen of the 17th-18th centuries. For this purpose a famous sculptor Hermann Brachert was invited for the position of an artistic advisor in 1930. His articles conjoined a combination of a harmonious splendor and constructive rationality of the Bauhaus school of design.

The same can be said about Jan Holschuh, Brachert's follower. After becoming an artistic head of the Manufactory in 1933, he set an aim of widening the production programme and initially setting a high artistic standard for the articles. Under his leadership and on the basis of his designs the Manufactory started making high quality and expensive household articles along with mass production. 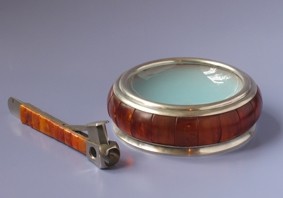 Within the range of household amber articles items for smoking were always prominent. Besides classic mouthpieces amber was widely used for making ashtrays, cigarette holders and cigarette cases.

A great rarity today is smoke consumers, or essential oil burners – special devices designed for the «betterment» of the air in the room. Due to influence of the warmth coming from an incandescent lamp, the aromatic oil was vaporizing through the holes in the upper part of the vessel, and with its odour it muffled the smell of tobacco.

Many amber articles were traditionally used as small and useful gifts.

Such were elegant lighters, guillotine-type cutters meant for cutting cigar ends. These articles were decorated with amber pieces tight-fitted to each other. Laconic amber decoration was a good combination with silver and other metals as in ashtrays with special cavities for cigars or cigarettes for instance.

Typical mass production of the Konigsberg State Amber Manufactory was writing sets. They were made of metal or wood and were decorated with amber. Desk sets were wide distributed, which served as desk decorations and were in great demand among customers as gifts.

The base of a writing set was thoroughly covered with slightly polished amber pieces. An inkstand with a flap was placed on the top as well as metal plates and stoppers for fountain pens.

An almost disappeared accessory on the desks is a blotter used for blotting a text written in ink. Along with a paper knife, stamp, paper weight and rack for letters, blotter used to be an essential part of a writing set.

Advertising actions of the manufactory

In the 1930s-1940s the production of the Konigsberg State Amber Manufactory could be found in the largest shops in many European capitals. Often portraits of German film stars were placed in shop windows as advertisement.

Daisy D'Ora, baroness von Freiberg, «Miss Germany» and «Miss Europe» of 1931, a cover girl who gained world-wide popularity for the part in the film "Pandora's box" (1929).

Olga Chekhova, a Russian-German actress from the family of the Russified Germans, wife of the actor Mikhail Chekhov. She was at the height of her fame in the 1930s, and received the highest title of the "State actress".

Lil Dagover who starred in many German films, first of all, incarnating the images of "elegant ladies", receiving the title of the "State actress" in 1937.

Valery Boothby, an actress, a star of Weimar cinema in the late 1920s-early 1930s who externalized the image of a femme fatale popular in those days. 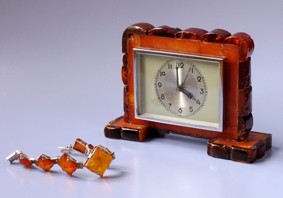 Beads, brooches, ear-rings, pendants, bracelets and rings were produced by the Manufactory in bulk. In their making natural as well as pressed and coloured amber was used that was often combined with metal.

The natural beauty of the «sun stone» showed itself most vividly in brooches and pendants. Due to the peculiarities of the structure, it was in those articles that the repeatedly polished "wild" stone turned into noble cabochon whose beauty was emphasized by the dim shine of silver. The common motives for making brooches were plant leaves, flowers and fruits.

Beads varied depending on the form and types of mount. Oblong and round beads from cloudy or transparent amber were rightly considered the most universal in the mass production. They went perfectly well with clothes and could look really nice when worn by a lady of any age and social status. 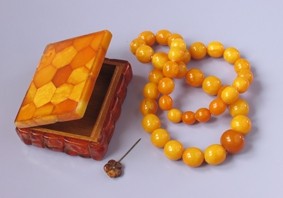 Caskets, various in form and purpose, made up a considerable group of articles: from small boxes with amber inserts on covers to large mosaic cabinets.

The mosaic was made in the form of a vegetative pattern characteristic of art deco or in the fashionable functionalist style from rectangular sheets tightly adjusted to each other.

Tendencies that existed in the applied art of that time promoted opening new possibilities for using the material and establishing the style characteristic of the Manufactory's articles including the distinctive mosaic composition.

Caskets were designed by a group of artists who after a 200-year long «silence of the great art of amber treatment» did in this sphere a really innovative job.

Sculptors Hermann Brachert and Jan Holschuh were able to creatively combine usefulness and low price of the articles – the original principles of the Manufactory – with the originality and modern character of their look. 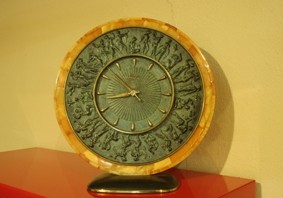 The height of production of badges, souvenirs and diplomatic gifts fell on the 1930s. Depending on the purpose and the demand, articles were produced both in large amounts and in small numbers.

For example, the symbols of power for burgomasters were made on special orders, as a rule, in a single copy, while badges could be produced in thousands and millions. Among such articles are badges in the form of a leaf or a flower that were awarded to the participants of the campaign "Winter assistance" in the course of which clothes and foods were collected for the unemployed and needy in 1933-43s. The Manufactory produced approximately 60 million of such badges.

Plaquettes and lockets in honour of important events were also made in large numbers. Among them is the locket with the image of the Konigsberg Cathedral made in 1933 for the 600th anniversary of its foundation and a badge of the "German East Fair" whose making was timed for conducting an agricultural exhibition in Konigsberg in 1936. 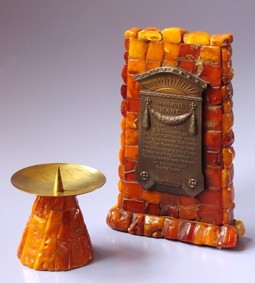 A lot of attention was invariably given to souvenir production reflecting the original East Prussian flavour. Here amber was used as a unique "brand name" material.

The motives for the articles were national East Prussian symbols. Among them was traditionally an image of an elk. A typical Konigsberg souvenir was Kant's miniature commemorative plaque whose copy one can see today at the base of the Castle wall.

The famous philosopher's aphorism on it runs as follows, "Two things fill the mind with ever new and increasing admiration and reverence, the more often and more steadily one reflects on them: the starry heavens above me and the moral law within me".

One of the most numerous categories was sports prizes: cups and plates made from amber and silver and used as honorary prizes at the Berlin Olympics in 1936. The use of amber in making sports prizes undoubtedly made it more popular.

Amber under the advertising slogan "German gold" became equal in the row of materials that were traditionally used for making such articles.