Jewellery art considers producing individual jewellery, expensive household items, subjects of religious cult, arms and other things made mostly of precious and also some base metals in combination with precious and ornamental stones particularly with amber, likewise with pearl, corals, nacre, ivory, etc.

Russian contemporary competitions of jewellery creation work are included in programme of arrangements, conducted during the large commercial fair-exhibitions. Their participants are as usual companies of jewellery brunch. Specialized exhibitions of author jewellery art, which would have been held on a regular basis with publication of scientific catalogues and holding of research and practice conferences and competitions, are almost absent in Russia. International Competition of Young Jewellery Designers “Image and Form” in Saint-Petersburg and Traditional Competition of Jewellery, Carving and Lapidary Art n.a. A.K.Denisov-Uralsky in Yekaterinburg are the only exceptions.

Realization of the competition in summer time – touristic season – will become fact of event tourism, place of attraction for specialists in applied art from different countries. After competitive show in Kaliningrad the exhibition can be exposed on different stages of Russia and abroad. The Amber Museum is also interested in purchase of awarded pieces and shaping of state collection of the best jewellery works of art in Russia.

Development of Kaliningrad as one of the leading Russian jewellery centers.

Procedure of attending the competition:

Opening of the competitive exhibition will be held on 15 June 2012.

Title, subject, estimation criteria and size of special prizes and awards are defined by their establishers with the approval of Organizing Committee of the competition.

A curator has right to present works of not less than 5 and not more than 15 authors for the competition. Each artist presents not more than 3 works or sets\compositions for a nomination. Creation time of works is unlimited. All the materials are allowed to use in presented for the competition works. Every work is handed in to the Organizing Committee marked with a label with year of creation, used materials and techniques on it. The given works will be exposed in Kaliningrad Amber Museum from June to August 2012. Works are given back to authors after the end of the exhibition.

Kaliningrad artists, who got diplomas of the Regional Competition “Jewellery for a Queen”, become automatically participants of the First All-Russian Competition of Author Jewellery in Kaliningrad.

Kaliningrad Amber Museum will consider the possibility of purchase of the works noticed by Jury of the competition for its collection.

Publication of the catalogue

Curators and independent participants should send the following materials electronically for catalogue publishing until 28 May 2012: participant’s application form (placed lower); pictures of the works presented for the competition; annotative or analytical article, prepared by curators of the exhibition. 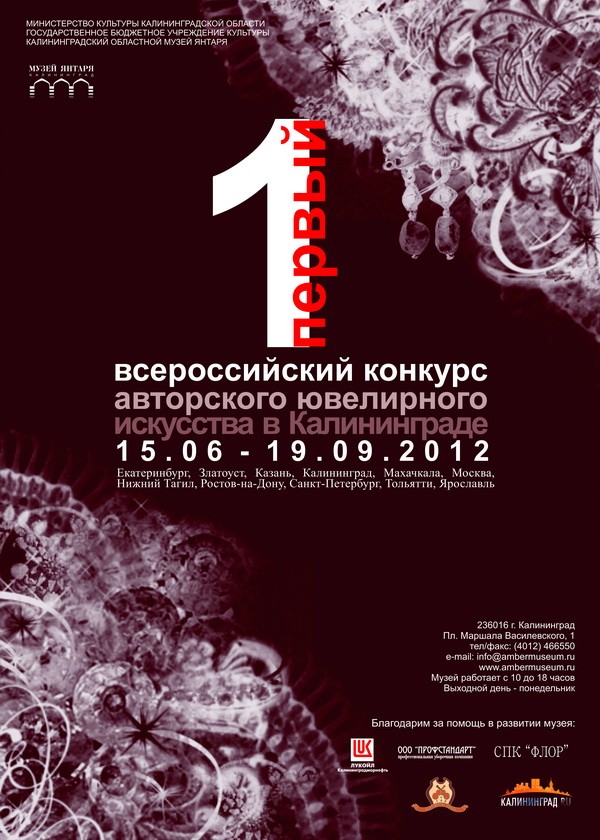 The event is part of the annual project or biennial

News related to this event

Working time calendar of this event