News from the Scientific and Research Department: a new species has been described

The respectable international English scientific journal "Palaeontologia Electronica" has published a collaborative work by an employee from the Kaliningrad Regional Amber Museum, Research Associate from of the Shirshov Institute of Oceanology RAS V.I.Alekseev (Kaliningrad) and Research Associate from the Komarov Botanical  Institute RAS P.I.Alekseev (Saint Petersburg).

The article is concerned with the description of a genus of cylindrical bark beetles from Baltic amber that is new for science. Modern representatives of the group are tropical and sub-tropical inhabitants of xylophage (wood boring) insects galleries. The new species has been named in Latin Damzenia groehni to honour Carsten Gröhn, the famous expert in Baltic amber, and in simultaneously to honour the Lithuanian specialist in inclusions Jonas Damzen, who paid attention to the unusual Eocene beetle and enticed scientists into studying it.

The described genus is represented by the only extinct species only 4 mm long and it is unusual due to its tarsal formula: fore and hind legs have four tarsomeres each, the mid ones – five tarsomeres. Such tarsal formula, according to the researchers, can be found exceptionally rare among representatives of modern beetles, it can imply some intermediate state of the character in the phylogenetic tree (evolutionary correlations) of the group. Beside the discussion of the unique combination of external morphology characters of this beetle and its evolutionary significance, a special place in the article is given to the reconstruction of the habitat of the extinct beetle. Using modern computer software (Terragen4 programme and the Xfrog software) an image of a site in the ancient "amber" forest (microsite) was recreated, where these extinct beetles and their nearest proximate environment existed. Such a computer approach to the reconstruction of the "amber" forest ecosystem in Fennoscandia (the area where it grew) has no analogues both in Russia, and abroad. The work is result of the active cross-border cooperation by European specialists and organisation from different countries – Russia, Lithuania, and Germany. The studied beetle is deposited in the collection of the Geological-Palaeontological Museum in Hamburg University. 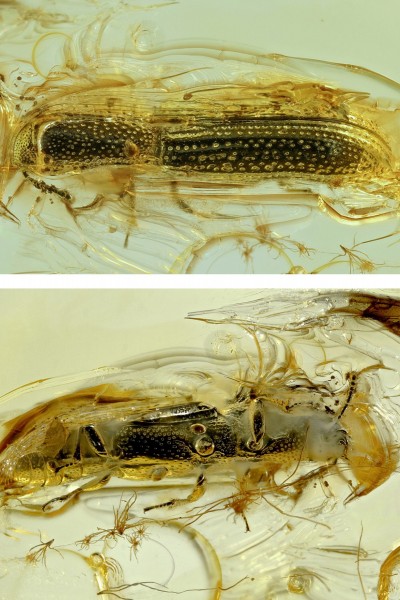 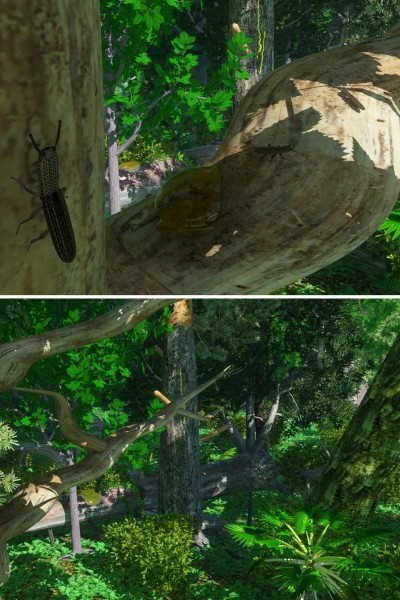